On Saturday, August 6, led by Richmond Our Power Coalition, hundreds of Richmond residents and allies are coming together to commemorate the 10-year anniversary of the 2012 Chevron Refinery Fire. We will be marching to Chevron to send a message that we REFUSE another 120 years of violence on our bodies, our communities, our air.

On August 6, 2012, a massive fire tore through the Chevron Richmond refinery, sending a huge plume of black smoke over West Contra Costa County. The fire blanketed neighborhoods in black smoke and the sky turned dark as the smoke blocked out the sun. 15,000 residents sought medical treatment, and many report developing long-term respiratory issues as a result.

In the aftermath of the fire, thousands of people mobilized to City Hall, demanding that our politicians and air regulators take real action to hold Chevron accountable and protect the health and safety of workers and communities.  Investigators with Cal/OSHA and the U.S. Chemical Safety Board found that Chevron had ignored a decade of warnings about severe corrosion in the pipe that caused the refinery fire.

In a 2017 interview with NBC Bay Area, Garrett Brown, a senior safety official with Cal/OSHA at the time of the fire, said “That pipe had gone from a quarter-inch thick to no thicker than a Coke can,” he said. “Management was willing to endanger the lives of Chevron employees, contractor employees and the community at large in order to save a few dollars by not shutting down a unit so it could be properly repaired and maintained. And that’s a decision they make for pure corporate profit reasons.” 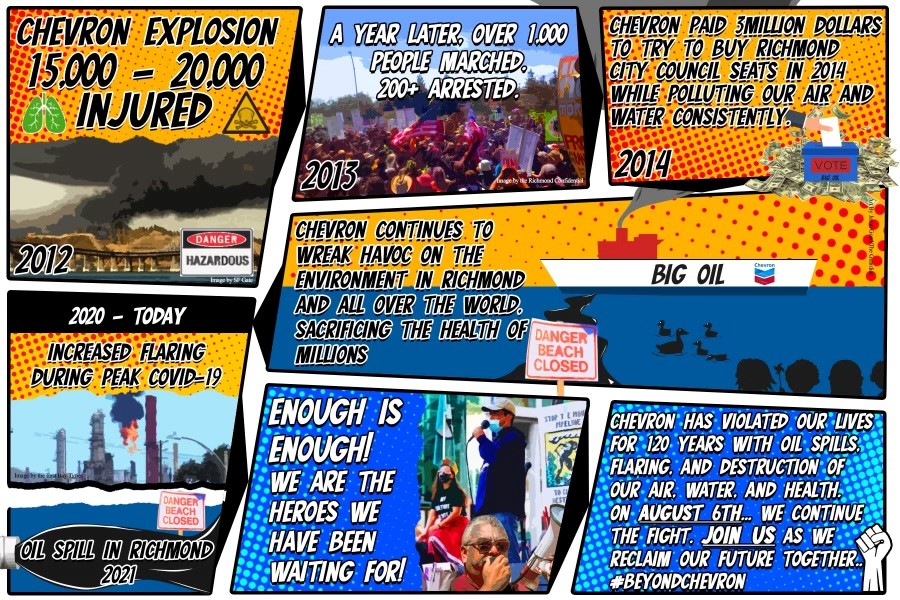